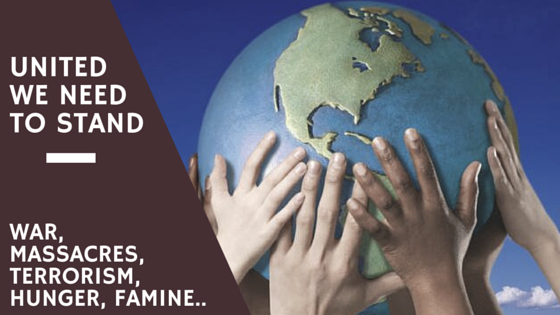 Let me start off by saying that I don’t make posts like these often but when I do it is because I feel a heavy burden telling me to do so.

Disclaimers: I am not obsessed with politics, I do follow them, however. I am Christian, I have Christian beliefs and I stand by those beliefs.

As I’m sitting here behind the keyboard with a feeling of loss in my heart I begin to really contemplate where we went wrong as a whole. Wars, massacres, terrorism, hunger, famine–so many detrimental crises.

Facebook post after Facebook post I witness someone demeaning people who are for or against the refugees being let into our country, people commenting “Christians aren’t like Christ”, posts that all Muslims are in ISIS, I see so much segregation among beliefs and values. I have Muslim friends, Athiest friends, Hindi friends, Christian friends, etc. One thing stands true with all of my friends, they care about the humanity of all people regardless. Personally, I’m tired of all of the negativity and pessimism going around and I want someone to actually stand up and do something productive. In times like this, we need to leave all of the foolishness behind, stop pointing fingers and calling each other names. We really need to find a common ground among the majority to figure out how to solve our problems.

“A fool takes no pleasure in understanding, but only in expressing his opinion.” (Proverbs 18:2)

First I would like you to google “Photos of Syria” then:

The risks on the journey to the border can be as high as staying: Families walk for miles through the night to avoid being shot at by snipers or being caught by soldiers who will kidnap young men to fight for the regime. 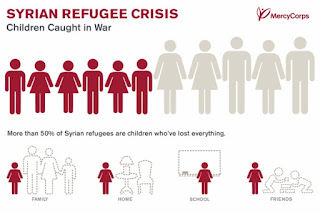 “He defends the cause of the fatherless and the widow and loves the foreigner residing among you, giving them food and clothing. And you are to love those who are foreigners, for you yourselves were foreigners in Egypt.” (Deuteronomy 10:18-19)

We must ALL stand together, be courageous, and never lose hope that the world will become a better place. We need change, whether it be politically, spiritually, or any other factor of change. It’s so cliché but we have to be the change we want to see in the world if we want to see the change. What is happening is nothing short of atrocious and I truly think it’s a time for our country to do something about the situation and the refugees looking for a “safe house”.

“Do nothing from rivalry or conceit, but in humility count others more significant than yourselves.” (Philippians 2:3 )